(English description and US$ price, please scroll to the end) 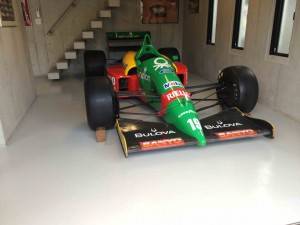 The Benetton B188 was a F1 race car designed by Rory Byrne and raced by the Benetton team in the 1988 F1 season and in the first half of the 1989 season. Dating back to when the team started as Toleman back in 1981, the B188 was the first car produced by the team not to be powered by a turbocharged engine.

Benetton was effectively the Ford works team as they had exclusive use of the 3.5L Ford DFR V8 engine for 1988 where others running Ford-Cosworth power had to make do with 1987 engine.

Designed by Rory Byrne for the ’88 F1 season, the Benetton F1 B188 exclusively boasted Ford’s 3.5-liter DFR V8, a descendent of the legendary Ford Cosworth DFV engine. The new V8 produced around 620 horsepower, which it fed to the track through a six-speed manual gearbox. While it doesn’t exactly have that instant recognition of the McLarens of the period, the colorful Benetton sports a livery you aren’t apt to forget.

And as F1 cars go, it performed remarkably well for the young Benetton team. The B188 never came away with any wins, but did earn the team a third spot in the constructor’s championship (39 points) behind McLaren and Ferrari. Third was about as high as the car would reach, though. In 1988, Nannini drove the B188 to a pair of 3rd place finishes, while teammate Thierry Boutsen nabbed the bottom step of the podium five times

The B188 was driven by the teams 1987 driver, Belgian Thierry Boutsen, and the hard charging, Italian Alessandro Nannini, brother of Rock Legend Giana Naninni, who had joined Benetton for his 3rd F1 season
Alessandro Nannini began his motorsport career in the ‘70s in rallying. He was good. The youngster raced his way up through Formula 2, proved himself at Minardi, and by 1988 found himself sitting in a Benetton F1 car.
This is the actual car -driven by – Alessandro Nannini
He scored two third place finishes at the British and Spanish Grands Prix, as well as recording the fastest lap in the wet German Grand Prix. Scored his only F1 race win at the 1989 Japanese Grand Prix after Ayrton Senna’s McLaren was disqualified. It was the team’s second ever win and the first since 1986. Nannini unfortunately ended his Formula One career with Benetton in 1990 after he lost his right forearm in a helicopter accident one week after the 1990 Spanish Grand Prix where he finished third (his forearm was successfully re-attached by Micro-surgery and Nannini has since regained partial use of his right hand)

Despite only regaining partial use of his right hand, Nannini was able to carve out a successful career in touring car racing with Alfa Romeo in the 1990s – placing 4th overall in the 1994 DTM and 3rd in the 1996 ITC.

Nannini competed for Mercedes in the 1997 FIA GT Championship finishing 6th overall before hanging up his helmet. He now runs a chain of upmarket cafes bearing his name, with branches as far flung as Indonesia.

2007 saw Sandro Nannini’s return to the track after a decade in retirement. He agreed to take part in the short-lived Grand Prix Masters Championship for Formula One veterans, in the first time he has raced a powerful single seater since his F1 career ended in 1990, alongside drivers including his former Benetton team mate Johnny Herbert

These web pages are constantly been updated.
Errors are possible. Changes are been made on a regular basis.
Oxcars.com will search and find your car for you.
OXCars.com Full Service Company – We Love Cars

.
All text, images, charts, and their arrangement on the oxcars.com website, are protected by copyright and other protective laws. The content of this website must not be copied, distributed, altered, or made available to third parties for commercial purposes. Some website pages also contain images copyrighted by third parties. We may provide links to third-party websites.
Willobey Investments LLC has no responsibility for these third-party websites, which are governed by the terms of use and privacy policies,
if any, of the respective third-party content providers. However errors are possible, but changes are been made on a regular basis.
Thank you for your understanding

OXCars.com – Full Service Company – OXCars.com
We Will Search and Find Your Car – We Love Cars

OXCars.com
Full Service Company
We Will Search and Find Your Car
We Love Cars

All information, material, data, creative content, formats and photographic content in this website is copyrighted © 1999-2015 by Willobey Investments AG. All logos are owned by their prospective companies

You can find out more about which cookies we are using or switch them off in settings.

This website uses cookies so that we can provide you with the best user experience possible. Cookie information is stored in your browser and performs functions such as recognising you when you return to our website and helping our team to understand which sections of the website you find most interesting and useful.

Strictly Necessary Cookie should be enabled at all times so that we can save your preferences for cookie settings.

If you disable this cookie, we will not be able to save your preferences. This means that every time you visit this website you will need to enable or disable cookies again.